As the previous post did a great job of explaining Wheeler’s delayed choice experiment, I thought a natural follow-up would be to talk about the delayed choice quantum eraser experiment. But while writing this post I became disturbed by the implications of the original experiment, so I ended up addressing that as well.

Going back to the ubiquitous double-slit experiment, we recall that each photon seems to go through a single slit (particle behaviour) only when we the observer are actually looking at what is going on each slit. Otherwise it goes through both slits simultaneously, and we observe a wave interference pattern at the screen. As the previous post explained, this is true even when the choice to look at the slits or not is made after the photon is past the slits, which seems to imply the mind-blowing conclusion that our choice to look or not look has somehow altered the photon’s history. More will be said on this at the end..

But first, the quantum eraser. (Or you could skip to the end right now – perhaps your choice will affect what was written in between :)) This experiment was proposed by Scully and Drühl in 1982 and first performed by Kim et. al. in 1999. It seeks to answer the question: If we do choose to look at the slits individually but then somehow erase this information, will we recover the interference pattern? 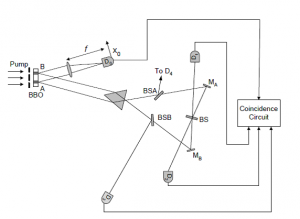 The experiment proceeds as follows. After passing through yet another double slit apparatus, a photon is split into two entangled photons by a beta barium borate crystal. One photon (called the signal photon) proceeds to detector D0, while the other (the idler photon) passes through a combination of beam splitters and ends up at one of four possible detectors. Essentially detector D3 can only be reached if the original photon went through slit B, D4 slit A, and detectors D1 and D2 can be reached with equal probability form either slit. One thus says the which-path information has been erased if the photon arrives at D1 or D2.

As you might expect by now, after conducting the experiment D1 and D2 recorded an interference pattern, and D3 and D4 did not. Evidently erasing the which-path information had indeed seemed to retroactively make the photon “choose” to go through both slits. Even more confusingly, when Kim et. al. used a coincidence counter to match each idler photon with its signal counterpart reading at D0, they found that each entangled pair displayed the same behaviour (i.e. if the idler photon showed interference at D1, so did its partner at D0.) The mystery was that the signal photon arrived at D0 before its partner even entered the multi-beam splitter contraption to have its path history erased or not erased. We seem to be left with a choice of two disturbing conclusions: either by manipulating the idler photon we affected the original photon’s history, or the original photon somehow “knew” what was going to happen in the future and behaved accordingly.

The explanation I favour that avoids all this evident causality violation is as thus: the photon does not “choose” to go through slit 1 or slit 2 (or both) at all! Returning to the original delayed choice experiment as promised, after passing through the slit apparatus, the photon is in a superposition of “went through slit 1” and “went through slit 2”. Removing the screen “at the last second” to reveal his two telescopes (or detectors) does not retroactively collapse the photon’s wavefunction when it was passing through the slits earlier. In other words, detector 1 registering a reading does not mean “the photon went through slit 1 earlier”. Choosing whether to use the screen or the two detectors is a choice of measurement basis. The photon then collapses into an eigenstate compatible with the measurement, and we have the observed wave or particle behaviour. We can apply a similar reasoning to the quantum eraser experiment, with more complexity involved. This is still decidedly strange non-classical behaviour, but at least it helps one sleep a little easier at night.